Time flies and we are boiled alive as the heatwave hits Budapest again. It’s been almost a month since we visited the UK with the lame cover activity of attending conferences, but ended up spending more time in record stores, bars and clubs than in those air-conditioned meeting halls. Big up to Dom ”Big Pants” ”silly as a five years old mouse organ” Servini for letting us spin at The Retreat in Islington, Gerry O’Rourke for the bar gig in the spaced out interior of the Cafeteria in West London (giving us a ride home cane as a lifesaver of a surprise), dj Vadim for lending us his portable turntable and letting us dig for records in the crates filling up his shed, the Russian Percussion for not minding us fooling around, Nippon Nik for his original nipple-twisting act + rare Japanese bondage goodies, Nigel Prankster, Pete Yak and Andy Thomas, Richard Ellis (Space Apple Quarktette/Further Out Records), Nick Lawrence (Altered Vibes/Nuevo Ritmo) and Will Quantic for showing us love, Tyler Askew for his friendliness, the boys at Hospital Records for the hospitality (ice creams, sodas and records behind the red door.), Snorre for the 12” (that tune is BIG), Mike at Goya for sorting us out with all the broken beats (will have to play the Champion Soul 12” over and over again until there are no grooves left on the disc), Gav at Disorient Records for digging and releasing our otherwise quite sick remix for Kaori and Schumacher’s Good Life (it is now pressed, make sure you grab a copy if you like your beats twisted), Réka for cooking for us, as well as Laci for not letting Shuriken sleep under the bridge. Special thanks for Simbad for hitting us with the test pressing of Simbad vs Noble Society - Word 2 Da Wise (Whatch Out: Heal - Bubblin’, another much played Simbad production has finally hit the stores. Check it out if you haven’t heard it yet!)

Good people of London beware! We might soon return!

In the last weeks we had a lot of people visiting Budapest too: the flash of Cukipapa’s digital camera still blinds us partially (after making the infamous ”WE LOVE YOU SICK JIMMY!” movie), digital klezmerist Jonathan Walton has just rocked the boat A38 with his band Oi-Va-Voi, Patrick Forge (of Da Lata fame) meshed up the open air place West Balkan with a very exciting Afro-Brasilian influenced nu beat set!

It is also worth to mention the Jungle Jazz festival, held at the Citadella, organised by djs Negro and Suhaid a few weeks ago. Nasty weather kept a lot of people away from this excellent two day event, however, true heads had a great time listening to Fingathing, Marky & XRS and Stamina MC and Kid Loco. Snowboy and the Latin section even managed to heat up the chilly night with hot hot Latin jazz. A quality event despite all difficulties.

Shuriken has also been invited to dj Solid’s Saturday afternoon show on Tilos Radio, and they had a lovely time spinning dusty old records, while Erik Sumo and Keyser have finished a tune (Flying Down) for a forthcoming compilation. It’s the first CSB tune ever, and it’s groovy.

Here comes a reassuring passage for all of you eclectic cats who can’t stick to the same genre, style and tempo for longer than 30 minutes:

”Van Silk: An Africa Bambaataa party was totally different to a Grandmaster Flash party, because Bam played more obscure records. I’ll be honest with you: I hated going to Bam parties. Bam would be playing the break-beats and then would jump off and start playing some reggae, or playing some rock. I was like ”What is Bam doin’?” But Bambaataa’s mind-set was that hip-hop was an open field of music. He’d take an Aerosmith record, ”Walk This Way,” and slow it, or speed it up.

Afrika Bambaataa: It might be slammin’, the people sweating, breaking, everything. And I would just stop in the middle of the thing and throw ”Sweet Georgia Brown,” and then everyody’d just start doing that basketball-type dance. I would tell them ”I want you to take it back to the day when your mama and papa used to dance,” and started playing a lot of ’60s records, and you would see people trying to do the Monkey, the jerk, the Twist, and all these type of dances. So when you came to a Bambaataa party, you had to be progressive-minded and knew that you was going to hear some wierd type of stuff.”

Keep on listening to weird stuff until next time!

Peace Still Is With Us 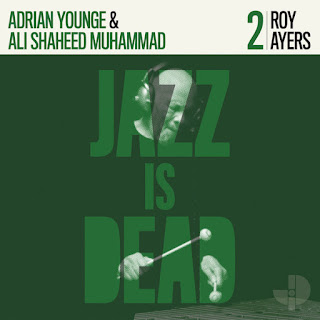